If you are a westener traveling to India for the first time, you should be aware that India has many local bacteria and viruses that your immune system has never encountered. So while they might be relatively harmless to Indian people, they might seriously annoy you. Also, while hygiene standards in India have risen spectacularly in the past decade, they are still considerably lower than what westeners are used to, especially among the less educated masses. So, if you want to maximally avoid spending a serious portion of your time in India in bed or in the bathroom, you might try to stick to the following tips and tricks on hygiene when traveling in India.

Of course, you will never be able to avoid all contamination, but you might at least keep it to a minimal level that allows your body to adapt to the new microbiological environment with minimal discomfort. If you are traveling to India for a long time and on a low budget, you might become somewhat less vigilant after a while, but slowly, slowly. If you just do what the indian people do and can do, you will be in trouble sooner or later. 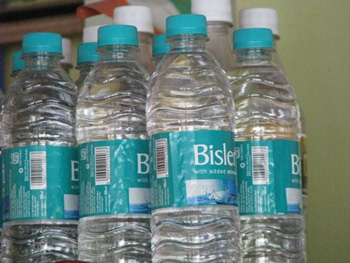 Always drink mineral water bought in a bottle, which is easily available these days. The cap sealing should be unbroken when you buy it. Avoid bottles that look old and dusty or that have been stored in the sun. In case of doubt, take the smallest sip possible - spoiled water usually has a distinctive, unpleasant taste.

Never accept a glass of water, however kindly offered in a private home, restaurant or shop. Just kindly show them your water bottle.

Many indian homes and restaurants have water filters these days. However, they are more effective at removing pollutants, than they are at filtering out bacteria and especially viruses. Many of these filters are also simply not working properly because of poor maintenance.

In case mineral water bottles (or softdrinks) are not available, boil the water for at least 5 mins or use a disinfection tablet. Alternatively, indian milk tea (chai) is widely available and it is quite safe because it gets boiled for a long time.

Food in India is exceptionally cheap according to western standards, so it pays off not to go for the cheapest food. Avoid buying foods from cheap restaurants & food stalls on the streets. These people often have little understanding about hygiene, cannot really afford to throw away food unless it is really rotten and often have no access to really safe water. So, just go for the more expensive restaurants. 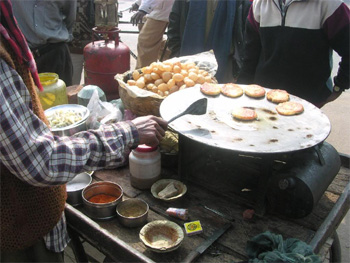 In case you have to eat something along the road, then foods which are fried in front of you (not just reheated) are a good option, as are pre-packed biscuits and other prepacked foods.

Never eat raw vegetables anywhere, because they might be washed in water that is just not safe enough. You often get them in restaurants as a side dish, but just leave them on your plate. If you like to eat fresh vegetables, buy them yourself, rinse them with mineral water and preferably buy those that you can peel before eating.

Same goes for fruits. Buy fruits that can be peeled, like lichees, bananas, mangoes, apples, etc. Don't drink fresh juices pressed on the street and neither have fresh sugarcane juice, however delicious.

Absolutely avoid meat, fish and eggs. Animal foods spoil much faster than vegetable foods. Animals in India are often feeding on highly contaminated waste. Animal foods in India are much more expensive than vegetable foods, so much less likely to be thrown when spoiled. In India, meat, fish and eggs are often not stored in a fridge, but they are rather put or hung outside in the sun, usually with many flies enjoying the offering.

Keep flies off your plate if possible.

Most tap water in Indian homes and hotels is safe enough for cleaning your teeth with. However, most doesn't mean all, so if you want to play really safe, use mineral water.

Avoid all contact with water from street taps. The people that use these taps have often little understanding about hygiene and they are also the most prone to disease. So while the water itself may be safe, the tap often is not. 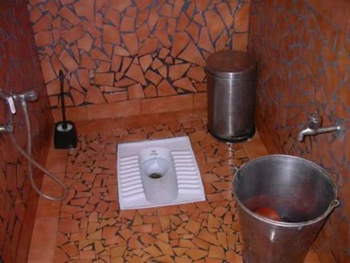 Toilets are obviously a hazard.

Indian-style toilets have the big advantage of minimal contact, apart from being also much kinder on your digestive system. Avoid western-style toilets or disinfect the seat or squat on them like you would on an indian-styled toilet.

Most indian toilets don't have toilet paper, though it is now widely for sale if you so prefer. Rinsing the anus with water is however much more hygienic. Use the left hand for this (and the right hand for eating). Do wash you hands afterwards with soap or use a disinfectant.

Hygiene in India : cuts and bruises

Any minor injury, even just a small scratch, should be disinfected as soon as possible. It is advisable to keep a small bottle of disinfectant spray in your handbag. Many are the cases in which a small cut rapidly developed into a highly swollen and blistering wound, sometimes also causing high fever and diarhea.

In case a wound has become seriously infected, rapidly see a doctor. We certainly are not in favor of antibiotics, but they might be the only thing that works.

Malaria is not often an issue in India, so taking anti-malaria pills in India is only advisable in case of a malaria warning.

However, mosquitos can also transmit other diseases, like Dengue Fever. So maximally try to avoid being stung by mosquitos, taking a mosquito net along and using repellant products. It won't protect you for 100 %, but it will maximize safety and minimize discomfort.

Also the micro-organisms that produce cold and cough in India are different from those your immunity system knows. Expect to be more sensitive than usual and protect yourself accordingly.

If possible, keep a distance from people that are coughing and sneezing.

Regularly wash your hands with soap to reduce contamination from doorknobs, money, etc.

This text was written by Peter Marchand, who also wrote these books : "The Yoga of the Nine Emotions" and "The Yoga of Truth".
Related pages