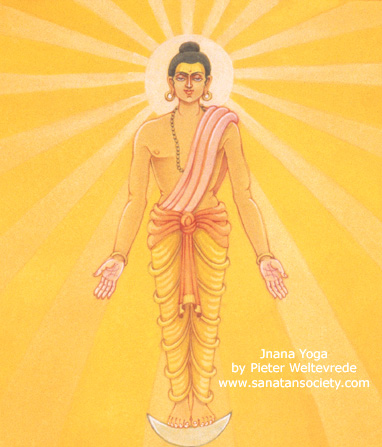 Jnana yoga, also called gyana yoga, is the yoga of true knowledge. It is based on the Hindu philosophy of nondualism, called advaita (nondual) vedanta (Vedic knowledge). A similar nondualistic view of reality is held by many branches of Buddhism, including Zen, by Taoism, by Islamic Sufism, as well as by some branches of Christianity that follow the Gospel of Thomas. Some of the best-known Hindu teachers of Jnana Yoga are Vashishtha, Adi Shankara, Ramana Maharshi, and Nisargadatta Maharaj.

Jnana yoga looks into the truth about who we are and what we are experiencing. The full realization of this truth brings enlightenment. Of course, all yogas offer a direct road to enlightenment if followed fully. Whether a particular road is suitable to reach this goal is a personal matter, largely depending on where you are coming from.

Jnana yoga can serve all people, whatever path they take. It keeps the true objective of yoga in sight and offers the blessing of truth getting closer at every step. But that does not make Jnana Yoga the only or even the best yogic path for everyone. Most yogis will combine jnana yoga with other yogic paths, such as bhakti yoga, karma yoga, ashtanga yoga and tantra yoga, as explained in what is the best yoga.

Jnana yoga is not based on any preliminary idea or dogma that you have to accept. It starts from direct experiences that anyone can have, even though these experiences may sometimes require deep contemplation and meditation.

But how to recognize truth? When we want to know the truth about something, we do not want to be fooled by appearances, by that which only appears and then disappears. Knowing truth cannot mean to know now that this is that, only to become something else later, depending on circumstance. So truth is that which lies beyond appearance and thus is never changing. If truth were changing all the time, how could it be truth? If a person tells you one day that he went on a vacation trip to China, only to tell you the next day that it was Switzerland, what can it tell you at all? Truth requires consistency. The path of right knowledge or Jnana Yoga means focusing on what is never changing as opposed to the illusions of Maya, which is ever changing. That includes the Ego or false self-identification and Jnana Yoga continually questions reality by finding "not this, not that".

Of course, appearances also have some truth, some reality. They may be called relative, temporary, or partial truth. In jnana yoga, however, the objective is to know the absolute truth about life, the truth that is never changing, eternal. To come to the absolute truth, the whole truth and nothing but the truth about yourself and your experiences, you have to look beyond the mere aspects of you and your experiences that change all the time. You have to find that which is essentially you and is essential to all your experiences. To find it, you may need to ask yourself a lot of questions, of which the main question is "Who am I ?".

Knowledge of the right and insight into the proper means of realizing the right in daily existence, are two essential attributes of Jnana yoga. One knows that the blocks that cloud the mind can be removed, that cosmic consciousness is an attainable goal. Jnana Yoga is the understanding of the laws of existence and the awareness of a means to synchronize with them. In Jnana Yoga one ceases to be attached to forms of expression and becomes drawn to the essence, the process of insight. The cause of bondage is maya. The cause of liberation from maya to bliss is jnana.

So long as the player identifies himself as an individual, independent being, he has karmas. And this is the cause of bondage. Jnana Yoga makes it clear that by reducing the scope and area of karma one can begin to establish oneself in bliss. This is insight into the game itself.

See also the book "The Yoga of Truth".

This introduction was written by Peter Marchand, based on his book "The Yoga of Truth".
Related pages